The Greatest Debate of Them All – part 1: Ice

When patients come to us in pain, we want to know as much as possible about what has happened. One question we regularly ask is whether the patient has found anything that makes them feel better. We might prompt them with questions about whether heat or ice have been tried. All too often, however, patients say that they’ve not tried one or the other (or both) because they were either unsure which to use because ice was painful, or because they were worried that they might inadvertently make things worse.

Let’s try and put this right!

Start at the Beginning…

Why would we want to apply heat or ice to an injury?

The answer is because we want to help the healing process. To understand what’s happening, I’m afraid we need to understand inflammation, the body’s way of healing itself. This is a complicated subject, so let’s just discuss some basics.

The initial immune response to an injury

When the body suffers an injury, something gets damaged. (Let’s not get tangled up in pain here! Whether something hurts or not is another matter completely.)

What does matter is that when injuries occur, cells get broken down and their parts scatter around the area. What happens next is an immune response. Our immune system can recognise which cells should be in the body and which shouldn’t, and can also recognise when damage has occurred to our existing cells. Clever stuff.

Largely speaking, the immune system is stored in our bloodstream and is made of lots of different types of cells each with different jobs, like the different pieces of a chess set. But how do these cells get from our bloodstream to the site of injury?

Part of the immune response is to make blood vessels leak…

The answer lies with one of the chess pieces. When damage is detected and an immune response is required, mast cells release chemicals called histamines. Histamines cause blood vessels to leak (this sounds pretty scary, but capillary vessels have walls that are only a single cell thick) and as the contents of our bloodstream escape into surrounding areas, swelling occurs.

This explains why you might use an anti-histamine when an insect bite causes a nasty swelling – in these cases, your immune system is overreacting, and too many histamines are being released and making your blood vessels leak excessively. An anti-histamine slows this leaking down. Steroids do too, but in a much more overwhelming way, which is why they’re saved for more serious situations.

Once enough immune cells have escaped through leaky blood vessels to the site of damage, all the other pieces of the chess set can join in; infections can be tackled, and damage can be repaired.

And that (in a VERY simplistic way) is how the immune system starts to fix things.

Now for some ice 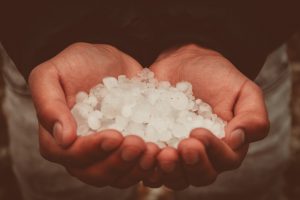 When we apply ice to an area it reduces how leaky the blood vessels are. This slows down the amount of fluid being released and leads to fewer immune cells reaching the site of injury. The result is less swelling and a slower immune response.

Hang on, did you just say a slower immune response? Why would you want that?!

The fact is that in sterile injuries, i.e. when the skin isn’t broken, the body’s immune system has a tendency to overreact. It allows more fluid containing the immune cells to leak into the area than is really required.

This isn’t necessarily going to cause us any direct harm, but there are occasions when swelling can cause problems by virtue of taking up space where we have precious little to spare. The neck is a good example of this. As soon as a joint in the neck gets inflamed and swollen, it can cause us to hold our head on an angle, and that causes other problems with neck muscles, headaches and so on.

Time to meet another of the chess pieces, prostaglandins, which are essential for repair, but also trigger a pain response. It’s these chemicals that are the target of anti-inflammatories such as ibuprofen or naproxen since by preventing their synthesis, we put the brakes on inflammation and also reduce the pain being sensed in that area.

The Nerve of it

Now we’ve mentioned pain, another benefit of ice is that it slows down nerve conductivity. This means that the brain will be receiving fewer signals from the site of injury, and fewer signals mean the nervous system is less likely to interpret the information it is receiving as being pain (again – pain is a big topic, let’s just leave it there for now!)

To summarise so far:

How to Use Ice

Mostly, we want to avoid ice making direct contact with skin, since it will cause the surfaces to stick. Go lick a lamppost in freezing weather if you don’t believe us. So, an ice pack wrapped in a tea towel is a good starting point.

You can also buy specific ice packs from high street stores, or you can resort to a bag of frozen peas from the supermarket. Even a bag of cheap salt can work well, as the smaller grains allow the pack to mould more closely to the surface being iced. 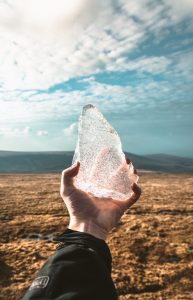 Raw ice can be useful, but perhaps not quite as large a piece as this…

Sometimes, direct ice on the skin can be used provided that you keep it moving. An ice cube in a bit of kitchen towel can be useful, or you can freeze a polystyrene cup filled with water and use this like a large lollipop to ice an area, peeling the edges of the cup as you go.

Needless to say, you will get wet, but the extra low temperature afforded by not having any layer of protection can have a powerful effect. The cold, melting water will also sink into all the crevices, delivering benefits to where they’re needed.

You probably want to get advice from a professional before using this, since it is pretty full-on, and more useful for certain, superficial conditions than for others.

How Long to Ice For?

One of the biggest mistakes that patients inadvertently make is that they leave an ice pack on for too long, especially on superficial injuries where the underlying bone is close to the surface. Leaving the ice on for too long can chill the bone, making it feel painful. Patients then, quite sensibly, decide to stop icing.

A period of 5 to 10 minutes is generally plenty, by which point the iced area will feel numb, and after that, the key is to make sure that the area is allowed to warm back up to room temperature before applying another treatment. 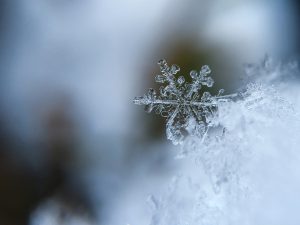 For superficial injuries, such as on your elbow, 5 minutes at a time is probably plenty, and because you’re not leaving the ice on for long, you can probably get away with less wrapping without becoming uncomfortable.

Again, it’s the numbness that tells you you’ve done enough! The test is simply to prod yourself on the area with an un-iced finger to see if you can feel yourself!

For deeper injuries such as certain knee or low back injuries, we probably need a period more like 10 minutes to allow the cold to penetrate deeper. But since it’s going to be on for longer, you’ll want to have a little more protection from the ice, so put something thicker around the ice pack. This slows down how quickly the superficial tissues cool, providing a longer period before they go numb and you should stop. In that time, the wave of cold can slowly penetrate a little deeper. So, as a rule – go slow to go low.

Similarly, if you’re using direct ice as described above, the rule of thumb is still that when it’s numb, you’re done. This will happen much more quickly, perhaps only 1-3 minutes, and

These processes can be repeated as much as you want, as long as the skin is allowed to warm up between applications. There’s no problem with having up to 50 applications a day!

This is because when we’re using ice to help control swelling and reduce pain, we reduce the likelihood of experiencing any of the side-effects associated with medications such as ibuprofen. That makes it safe to use, albeit more effective if used along the guidelines we’ve been through above.

As always, if this blog has made you think that you might need some advice or help with an injury or pain, please do not hesitate to call the clinic on 01344 625475, where our team are ready to help!

Similarly, whilst we’re keen to promote that fact that ice is safe to use, in order to get the most out of it, a correct diagnosis is paramount. You can ice what you think is a tennis elbow all day long, but if the pain is referred from your neck, you’re unlikely to get anywhere! Again, our team are here to help, and to steer you towards the best management possible. Simply call 01344 625475 to start your road to recovery.

Toby is an osteopath at OpenHealth, and regularly contributes to our blogs.