How does a gumshield make a tennis player better?

02 Feb How does a gumshield make a tennis player better? 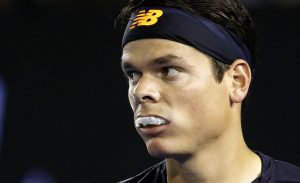 Milos Raonic and his gumshield

You may have seen on the sports news last week that Andy Murray’s semi-final opponent in the 2016 Australian Open semi-final, Milos Raonic, wears a gumshield whilst playing. Apparently, it was the idea of his chiropractor, albeit in interviews Raonic doesn’t seem too clear on exactly why!

Well, try this for yourself…

You should find that it’s easier to produce more power in your arm with your jaw clenched. (Don’t worry if you don’t – it can be quite a subtle difference)

Some people feel that the body is hard-wired neurologically to give preference to muscles that keep us alive – including the muscles that we use to eat. Some also say that by clenching the jaw it stops us from inhibiting the use of other muscles through the body.

In the case of Raonic, tennis commentators have noticed that his movement around the court has improved since he started wearing the gumshield. It seems that by taking some of the tension OUT of his jaw, his muscles have relaxed and his movement has freed up. As a result he has performed better – remaining unbeaten for quite a while (until he met Murray).

So there’s a nice example of how the body is connected and how its parts can affect each other. Our practitioners are fascinated by such complexity of the human body, and this is what drives them to keep searching for the answers to their patient’s complaints.